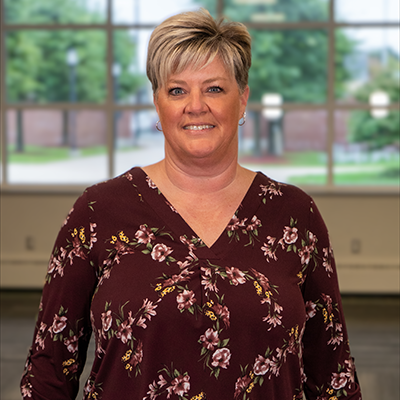 Bachelor of Science in Geology, Smith College
Master of Education in Curriculum and Instruction, King’s College

Kim McNulty was named the Director of Advancement in June of 2011 and is responsible for all of MMI’s fundraising efforts including the Annual Fund, Corporate Giving, Planned Giving, and The Jake Kislan ’56 Memorial Golf Tournament. She also oversees all of MMI’s alumni events, such as Alumni Weekend, various mini reunions, and many of the MMI community’s other social events. Prior to being named the Director of Advancement, Mrs. McNulty served as MMI’s Director of Admissions and Financial Aid from 2007-2011.

Prior to joining the MMI family, Mrs. McNulty was the Sports Information Director and Assistant Athletic Director at the United States Merchant Marine Academy in Kings Point, New York, for nine years. As an Assistant Athletic Director at Kings Point, her responsibilities included all scheduling, NCAA compliance, and administration pertaining to the mens’ basketball, womens’ basketball, mens’ and womens’ swimming and diving, softball, and volleyball teams. In her role as the Sports Information Director, Mrs. McNulty oversaw all marketing, media relations, brochure design, website updating and home event management for a 27-sport NCAA Division III athletic program. She also ran the marketing events at all Academy home games securing local corporate sponsorship and executing student contests as well as special community days. During her tenure at Kings Point, Mrs. McNulty additionally served as the Director of Media at the NCAA Division I Mens’ Swimming Championships (2004), the Skyline Athletic Conference Publicist (2001-2004), and the Media Director at the NCAA Division I Womens’ Swimming Championships (2001).

Mrs. McNulty earned her Bachelor of Science Degree in Geology from Smith College where she also was a member of the varsity soccer and softball teams. She coached boys varsity soccer at South Hadley High School, girls varsity soccer at MMI, and was an assistant softball coach at the U.S. Merchant Marine Academy. She earned her Master’s Degree in Curriculum and Instruction with a specialty in Excellence in Teaching from King’s College in May of 2013.

Mrs. McNulty resides in Forty Fort with her husband, Tim, and son, Kevin ’21. Mrs. McNulty currently serves as a member of the Hazleton Rotary Club Board of Directors, is a Vice-Chair on the Hazleton Chamber of Commerce Board of Directors and the Chair of the Women’s Networking Committee, is the Secretary of the St. Ignatius Catholic Church Parish Council and a member of the Service Commission, and is the Secretary of the Board of Directors of Leadership Hazleton. She was a member of the Wyoming Valley Montessori School Board of Trustees from 2010-2016, serving as President from 2013-2015. Mrs. McNulty is active in the Council for Advancement and Support of Education (CASE) and the National Association of Independent School (NAIS), attending their School Leadership Institute in 2015 and numerous national conferences sponsored by both organizations. She was a 2017 Hazleton YWCA PEARL award recipient. PEARL is an acronym for professionalism, excellence, achievement, role model/responsibility, and leadership.

To contact Mrs. McNulty, please email her at kmcnulty@mmiprep.org.